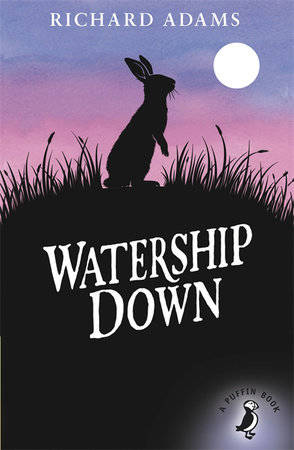 Cliquez ici pour le commander
Watership Down by Richard Adams has become one of the most famous animals adventures ever written.
In this epic story, a young rabbit called Fiver senses that something terrible is about to happen to the warren - he is sure of it. Fiver's sixth sense is never wrong according to his brother, Hazel. They had to leave immediately, and they had to persuade the other rabbits to join them. And so begins a long and perilous journey of a small band of rabbits in search of a safe home. Fiver's vision finally leads them to Watership Down, but here they face their most difficult challenge of all . . .

Richard Adams grew up in Berkshire, the son of a country doctor. After an education at Oxford, he spent six years in the army and then went into the Civil Service. He originally began telling the story of Watership Down to his two daughters and they insisted he publish it as a book. It quickly became a huge success with both children and adults, and won the Guardian Children's Fiction Award and the Carnegie Medal in 1972. Richard Adams has written many novels and short stories, including Shardik and The Plague Dogs.